Do your part and vote... for the winner of a wire bug.

[EDIT- Polls are closed]
Thanks to all who entered in our little contest give-away for the Paintbrush Bug. It's been an interesting couple of days of checking in on the new entries and comments. 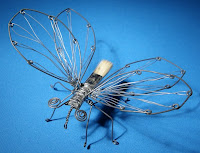 It was ridiculously hard to narrow the finalists down. Many clever entries were eventually eliminated. Please feel free to curse my name when you don't find your entry in the space that follows, there's a good chance that it deserved to be included, but what can I say? For all the enjoyment that I get from reading the entries as they come in, it's all balanced out by the part where I have to narrow them down. For quite a while, I was going to give up and put them all up for a vote, but that would have been the coward's way out.
[ Edit - My wife saw my choices a half hour after I posted and didn't agree with a couple and wanted me to change something! Too late! ]

Please go to the sidebar to the right to vote.

Others are bending words into strings of artful thought.

I cannot bend my mind easily along those twists and turns.

My thoughts are visual, following curves of bent and twisted wire where the bits are as interesting as the whole. A conduit of thought.

My three-year-old son is currently fascinated with bugs and spiders. When I showed him this photo and said you wanted to give it away, he said,

From the mouths of babes.

There once was a wiry lass
Who wanted a romp in the grass,
But she got no elation
'Cause her reputation
Was being a paint in the ass.

“Zhey’ll sproot vings und fly avay!” mother would scream in her guttural accent...
Inexplicable, as we were from Connecticut.

Tend to your brush, or else.

How I was rueful that day. Rueful. Full of rue. Damn my arrogance.

I paint no more.

A brush - my wand
for with to create
No!
A brush - an object
with secret life that must escape

Ecology: often seen in the summer months predating on eisel and board. Dislikes damp or wet weather.

Status: in decline. Habitat threatened by electronic equipment and mice. Sustained collection and display by enthusiasts have exacerbated the decline.

Prettily poised, the Parisian Paintbrush Pest pondered her predicament.
“In ipso facto,” she intoned, “I initially intended to
Navigate nearby. Notwithstanding my nervousness, I
Came to the crazy conclusion that a cross-continental cruise was
Exactly the essential elixir I should embrace.
An amazing affair arose, and I’m now artistic!
Unbelievable!”


(The first letter of each line spells the French word for paintbrush - pinceau.)

This is a limerick I made using all 100 tiles of the Scrabble game. The last 'u' and 'g' are the blanks:


I joined a paintbrush bug,
Squeezed its fly-eyed mug;
As I received an ovation
For a complex narration,
I work well to get a hug!

and now- The following people have already one some mediocre prizes!


First of all, I must award this used Starbucks card that at one time was worth fifty dollars. I believe it still has a little over $2, maybe even $2.50 on it. Not enough to get one of those expensive drinks with the whipped cream on top, but enough to get a large Iced Americano (my personal drink), or maybe some chocolate covered graham crackers.

This work, which has too many words (there were a few good ones like that) to be in the running to win the bug, tickled my fancy anyway (plus, she's followed this blog for a looong time). Congratulations!

The paintbrush bug was no ordinary bug.

He taught Michelangelo how to make marble take on an illusion of flesh and muscle,

he taught Vermeer how to paint light,

he taught Monet how to match his brushstrokes to nature's mood,

and he taught Picasso to paint fearlessly, all his inner turmoils.

His last student was by far his favorite --

The paintbrush bug taught her to never forget the joy of creating.

Suzy turned 10 and started pencil-sketching, and then she turned 14 and started taking pictures. By 17 she was writing poetry, and in college she took up pottery. The paintbrush bug watched her fall in love, get married, and have children; he sat on her dresser, forgotten but glad.

Suzy never became as famous as Michelangelo, as enterprising as Vermeer, as refined as Monet, or as notorious as Picasso.

Still, she taught her children to create, and find happiness in it, as soon as they were old enough to finger-paint.

The paintbrush bug eventually disappeared from that spot on Suzy's dresser, never to be found --

Maybe if you're lucky, he'll land in your life next.

Next we have johanna, who posted a poem. I had a couple of entries this time that were kind of downers to tell you the truth. I prefer Bent Objects to be a happy, twisted little place (other than my occasional political rant), but I keep the door open in these contests to most anyone who wants to enter. Anyway, I picked johanna's entry for a special prize because because we had something for her that amused me.

Flowers Of Black
a poem

She stands in the middle of the grave

Her flesh turning white as she stands over her own body

She looks around her as she watches her family sob

Scared that her family wont celebrate the same as before

Watching her father praying to the lord

Everybody with their heads down in one row

Laying flowers on the brown casket

There is no point for flowers

It doesnt make any sense to her

Flowers are not supposed to die with her

Every soul always come back

She stands next to her older brother

Wondering if she made him proud

One tear falls from his cheek

She catches that one tear in her pale hand

Feels the salty drop and rubs it on her cheek

Because all she feels is numbness

No emotion left in that soul

But she still feels the warmth in her family

She knows they love her

She died too young but accomplished everything she wanted

She is just so surprised the random people around her

The love is in the air

Even if its love with sadness

In minutes she sees all the flowers in that casket

Every Hand, every touch she counted

Her soul always comes back

Here's what I have for you, Johanna. It came in the mail two days ago, and it entitles the person with the card to a pair of free panties the next time you visit Victoria's Secret. You get to choose from white, whisper pink, ivory, buff, or black.