Meet me in person? I'm so excited for you!

Hey there, I'm speaking at the Indiana Author Fair December 5th, at, I believe, 2:30. I'm also there from 12 until 4 to autograph any books you want autographed. They don't even have to be mine. Heck, if there are any ladies out there who want their bodies autographed, come on by. My wife can't be totally vigilant the whole 4 hours. 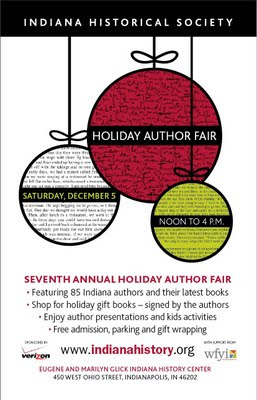 -----------------------------
Are you in part of the world, Singapore or Eastern Europe for instance, that makes it difficult to order the Bent Objects book? I can't vouch for them or anything, but I've heard from a couple of people who have used The Book Depository. They even claim free worldwide delivery.

The winner of the limerick contest from last week? Very challenging to judge. The final three were a toss-up. I finally went with this one-

In November, the turkey thought, "Damn,
I don't want to be served with the yams."
So he cooked pig for folks
As he told them great jokes,
And he was spared for being such a ham.

If any of the other limerick contestants who entered would like one, I'd like to send you one of the holiday cards from me to you. Maybe even a worthless doodle in there also. Just send me your address.

Don't forget to order your doodled-in Bent Objects book . Order now and it'll be there in plenty of time for whatever holiday you want it for.