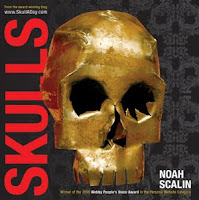 I can't remember how I stumbled on Noah Scalin's Skull-A-Day blog a couple of years ago, but it immediately became my first stop on the internet every day, for a year. Well, slightly less than a year, because I didn't discover it until after he was already at it for several weeks. Just imagine, challenging yourself to pick an object and recreate it every day, in a different way for an entire year (the blog is still churning out neato skulls, but now mostly by fans).
I've since found other people doing a drawing a day, a sketch a day, whatever, but none inspired me, and excited me, like Noah's project where, from day to day, I had no idea what he would try (and succeed at) next. His project was so much more wide ranging, and a much larger challenge. A skull made out of an arrangement of human bodies? Check. Making a loaf of bread so that a skull was visible on individual slices? Check. Great, great stuff.
Now, I've never been particularly in love with the whole skull motif. In general, I think it can be a short-handed way for a not-so-good artist to try and add an edge to their work, an air of "cool" when there was none before. But that's not what Noah's blog and his present work is about. If you check it out, you'll see what I mean.
In full disclosure- I've been an internet friend of Noah for a couple of years now. We even did a collaboration during the run of his project. He's been kind enough to mention my book on his site, and I've mentioned his book here before. But this interview was motivated by me just wanting to honor and recognize an artist who has brought me so much entertainment, excitement, and intrigue over the years. He's one of those people who attacks things from a different angle.
drum roll... The Interview-

So, what's the deal with you and skulls?

I’ve always loved them! Seriously I just found a great drawing of a skull that I’d made at age 6/7 so I think that’s fairly good evidence. By the time I’d started Skull-A-Day I had a bunch of skulls decorating my house and my skin so they really are an integral part of my life. I’m also very committed to the idea of living each day as fully as possible so the classical idea of having skulls in your environment as “memento mori” makes sense to me.

How long into your project did it take before you asked yourself "What the heck have I gotten myself into?

About 10 days. That’s when I discovered that there were more than just my friends watching, but actually a large international audience was starting to pay attention. It also stressed me out that I was getting positive feedback so soon as it made me feel like I needed to maintain a certain level of quality, if not improve upon it constantly, which is damn near impossible to do on a daily project.

I'm sure time was an issue during that 365 days. Between thinking up ideas, creating them, photographing them, then blogging them (which can be a job in itself sometimes), what things did you have to give up during your project? I'm sure it was a lifestyle change to some extent.

Strangely I felt like I gained a lot more than I lost during that time! I was still working a full-time job, so somehow I managed to squeeze more and more out my day as it went along. After it was over, it was hard to imagine how I found the time every day. Oddly enough even though I had less time for some social activities, I was actually seeing some of my friends more often (and for longer periods of time), since they were helping me get things done. I guess what I really gave up was sleep, since I was getting up earlier and earlier to do more in the day (as I had committed to the fans of the site to be done by midnight each night)!

What was the most challenging skull that you created?

For sheer time and effort, the latch hook skull was especially tough. It wasn’t a particularly hard technique, but it was a complicated process to work out how to translate a preexisting image into something else and the labor is not really something one should attempt in a single day. It took me a total of nine hours to complete. Not only were my arm and hand cramping from the repetitive motion, but I developed a migraine part way through and had to take a nap to get rid of it before continuing. I think the end result was worth it, but I’ll never do latch hook again! 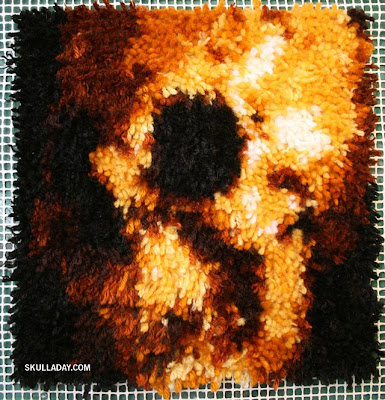 Which is the one you were happiest with?

That’s a really hard question. There are so many I like a lot and in many ways it was more about the overall experience than the individual pieces. That said, I find the Skullevision to be very satisfying. It makes any TV show interesting and is great to leave on at parties. 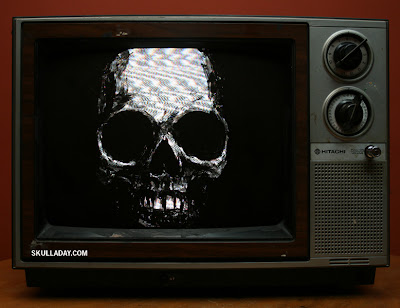 You got to appear on the Martha Stewart show. What was her green room like? Any good snacks?

It was tastefully appointed, there were delicious fresh baked cookies, and a large screen TV where I could watch the show as it was taped. Quite pleasant.

Since she's been to prison, don't you think it would be cool if she showed her audience some of the shiv making skills that she learned in the big house?

Absolutely. And considering she’s had me and Snoop Dogg as guests I think anything goes at this point!

Ha, she was very nice and we had a lovely chat while we waited together between shots. She was very focused on the craft part though and continued working on her potato stamps even when the cameras weren’t on us.

What do you think of Damien Hirst's skull? The diamond covered one, I mean.

Oddly that skull came out shortly after the project started, so even though it was not an influence on me it came up a lot at that time. I don’t really have a strong opinion about it either way. It’s pretty, but I’m not moved by it and I understand that the sheer ridiculousness of it offends a lot of people and turns them off to modern art, which I think is a shame. In many ways I hope that Skull-A-Day is the remedy for that.

Do you still wake up thinking about things that you can make a skull out of?

No, I think I’ve gotten it mostly out of my system. Though I do still find myself making skulls with very little provocation.

What's the latest project that you're excited about working on?

League of Space Pirates (http://www.spacepirate.org) is a multimedia science-fiction project that I’ve been developing for a long time and I’m finally finding the time to make some headway on it. I’m looking to release a full-length album as part of it in 2010, so I’ve been having a lot of fun spending time in a recording studio away from my computer.

Thanks to Noah, who put up with my silly questioning!

His book "Skulls" is a collection of many of the skulls that made up his year long Skull-A-Day project. I especially recommend it as a gift for that hard to buy for young person that you have trouble finding something for. It's available on-line of course, as well as most well-stocked book stores. 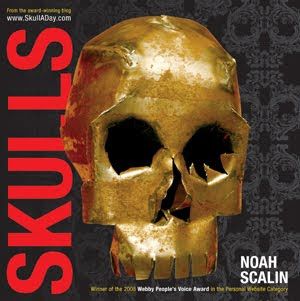