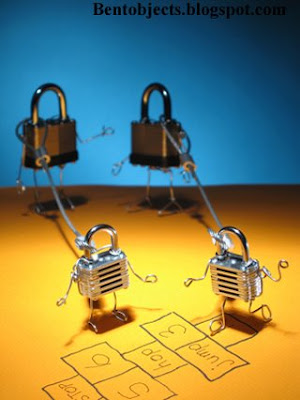 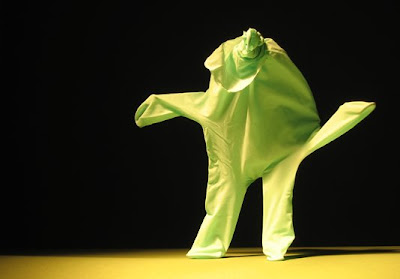 A glove taken from a doctors' office.
Posted for the heck of it.
Posted by Terry Border at 9:27 AM

Well, this is just ridiculous.  It's been over a week feeling like this.  I bought a new camera and lens recently, and haven't had a healthy chance to use it once.  I've had to come home early from work the last two days, and I just come home and sleep.   Haven't had even one idea for a photo.  My brain has shut down on me too, apparently.
edited 3 minutes later- I just came from Drawn!, where I read a post about Jillian Tamaki (you can read about her work there).  She was mentioning what she listens to when she works, and I figured I may as well do the same and save this post from being a total waste of time for you guys, instead of-- waah, I'm sick, or whatever.
Anyway-  Like Jillian, I also listen to This American Life, it's fantastic stuff.  It's available on podcast  Other than that, like Jillian, I listen to a lot of NPR, and BBC.  Music-wise, I play everything from Rage Against the Machine, Beck, Johnny Cash, Feist, Pavarotti (got to see him several years ago.  He was still great), U2,  and many others.  To get a range of ideas, I think it helps to listen to a wide range of music, listen to a wide range of people, study a wide range of art.
It seems many people stop trying out new things after they graduate.  For example, their hairstyles are locked into place after high school.   Any music that they listen to is the music of their youth.  I do understand why this happens though.   Everyday life, making a living, it takes effort, and many times there isn't enough energy to seek out, or experience something outside a persons norm.   I understand the wonderful freedom a person feels by not having to keep up with the latest fashions, not feeling the peer pressure of classmates to do so.  It's one of the many pleasures of being out of school, of being able to be more yourself and not dealing with the hierarchy of classmates or whoever.  It's truly wonderful not worrying if you fit in enough to get a date on a Saturday night.  To you who are still dealing with this in school, it will get better later in life for many of you.  It did me anyway.
If I want to be lazy and wear my pajama pants to the video store, I do.  My wife laughs at me, but there isn't anyone I need to impress there.  On the other hand, I'm not blind to the different fashions going on.  I like many of them.  And as for music, art, cinema- give me new, new, new! Show me something that I haven't seen before!  I'm hungry for surprise.  Show me someone who is trying to think in ways that no one else is.  Nothing makes me more excited.
In the end (When it comes to my work), if I need to get myself going, then I play some energetic music, drink some strong coffee (the caffeine buzz is very helpful), and maybe jump up and down a bit.
Have a good day, and hopefully I'll have something new for you to look at soon.
T
Posted by Terry Border at 2:38 PM

Doodles for the Circus Peanut Series 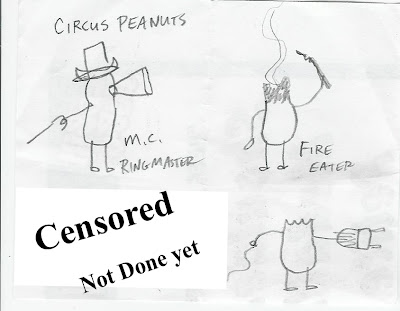 Doodled these at work on scrap paper. The next one to be photographed is the one being hidden here.

As you can see, the fire-eater and lion tamers' poses stayed just like I first imagined them. The other two changed drastically.

(New here? If you scroll down a few posts, you'll see this series.)
Posted by Terry Border at 7:47 PM 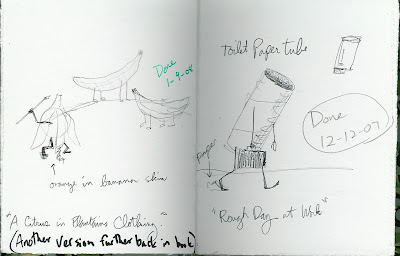 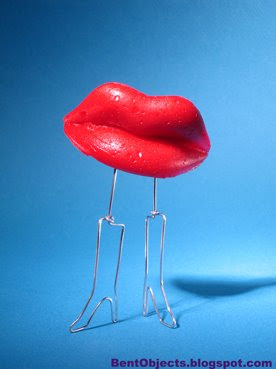 I will probably involve her in a narrative at some point, but here she is just posing for you.

Oh, yeah- those are wax lips. Do people in other parts of the world know about wax lips?
Posted by Terry Border at 6:46 AM 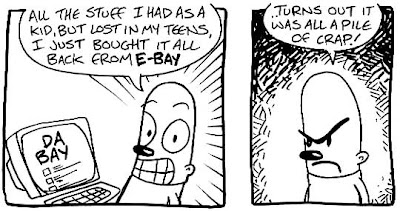 OK, I've been trying to spread the word about this guy for a while, and it's time to give him some space here at the blog. He says that he just lost his job, so let's all go over there and leave an encouraging comment or two, shall we? Please?

I think the guy is hugely talented, but his blog doesn't get the attention that it deserves. Be warned, it's not always safe for work. Much, much adult humor, which probably hurts him some ways as far as sale-ability, but I think it's winning work. Also, my wife is more conservative than I am, and says it's more of a male kind of humor, but you please be the judge there.
Anyway, here he is - Where I Vent My Spleen

Here is his flickr account. He's created a ton of philosopher trading cards, physicist trading cards...just a ton of funny cards.
Posted by Terry Border at 6:45 AM 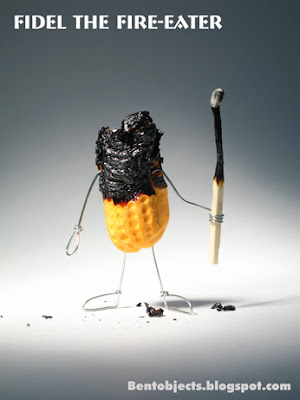 Another Circus Peanut Tragedy. I really think these guys need to stay out of show business.

One that didn't make the grade.

So, I'm making some images for the sole purpose of having fresh stuff for my book. Been really busy, really pushing myself, and after I showed my wife, my brother, and several artist friends the following image, only one person was able to figure out what I was trying to say here. I was depressed. I went out for some coffee. Had to take a break.

I came back and looked at it again. I tred to figure out what I could have done differently. I still liked the photo, but decided this is going into the pile of ones that didn't make the cut. I then told my brother that I was gonna hide this. I'd pretend that it never existed.

Well, it's a bloggers' prerogative to change his mind. So here it is, the little image that couldn't. Why I'm posting this, I don't know. What the heck.

We'll call it-- "The Terrible Story Behind Our Personal Hygiene Needs". 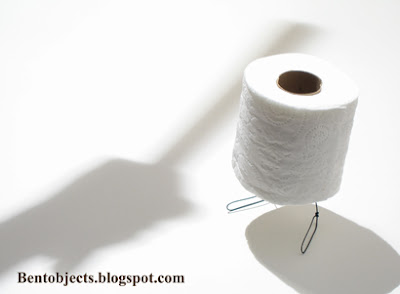 I totally changed the title and info for this post. Who knows? Maybe it'll make a difference.

Whatever happens, I'm not giving any hints about what it means.
This image is pretty much just an example of how confusing one mans' mind can be.

Strangely Orange Snack Appreciation Day. When I was writing that, I wasn't thinking about the acronym, but I obviously should have given it more thought (but, as is my habit, I'm making most of this up as I go along).

First, thanks to Scott, On with the blather, Elena, and Katie Alender for pointing out the acronym. Before this movement really takes off, I think that we should give that some more thought. I mean, this should be a happy day, right? But SOSAD doesn't sound so happy. I really like Katies' creation of OSNAP (Orange Snack Nibblers Appreciation Day), even though I'm choosing to do make a whole day of it, which is more than just a nibble. I realize that any sane people out there who join in will just join in symbolically with a cheez-it, and/or a glass of juice.

Anyway, please feel free to leave your opinion in the comment section.

While you're thinking about OSNAP, or SOSAD, or whatever, here's another poor circus peanut. One of the commenters (cm?) was asking where I got my inspiration for these. Well, this one is courtesy of too many cartoons watched as a child (but it's finally paying off for me!). 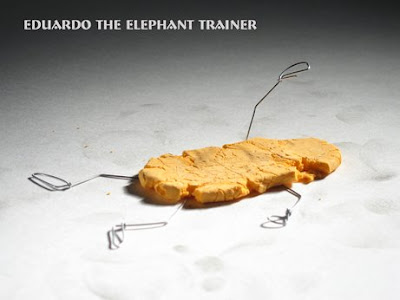 He had always been so sure footed... 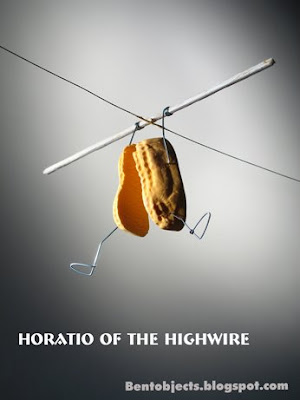 Another fatal accident at the Circus Peanut Circus.