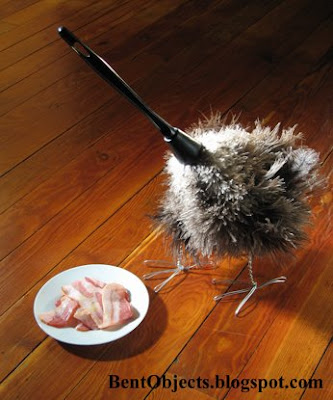 Edit- Sometimes, I get too close to an idea, and the story has written itself in my head, and I think that others should be able to figure it out. I've slowly learned that there are times where this is a good thing. There are other times when I want to let others in on "the joke" (Although mostly this isn't a "joke". It's just part of a weird story.)

It's a fact that these particular characters are very hard working. They take such enjoyment from wiggling their tail feathers over dusty furniture. They've been bred to act this way I suppose.

Anyway, ours has been worth its' weight in raw meat, which makes up its' three meals a day. Just be careful around it will you? It also has an appetite for pinkie fingers.


I didn't include the previous story until I woke up early the next morning thinking about this post. Kudos to the Crafty Mama, Carol, anonymous, and kjaere, for commenting even before I added it.

Todays' Dr. Seuss moment has been brought to you by the Bent Objects Corporation.
Posted by Terry Border at 8:49 PM