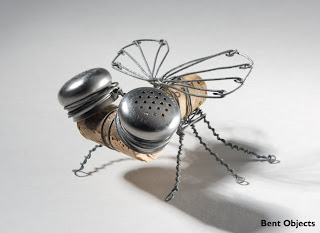 Just a spider doodle, and what I've been doing. 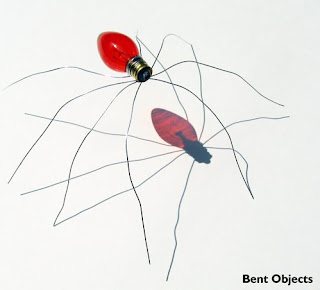 I wanted to tell anyone who's interested what I've been up to, and as I really don't enjoy just posting words, I grabbed this little red bulb and tried to turn it into a spider (eight legs added to most any object ends up looking like a spider).

The deadline for me to turn in all my images to my publisher is fast approaching, so I've been trying hard (probably too hard) to get as many created as possible. Problem is, you can't rush creativity and have great things happen. My plan is to just make as many as I can, and then hopefully I'll have some that are very good, and I think that's what's happening so far. Last week, I think I made my best one in quite some time. After something like that happens, it makes me want to try and equal it with a few more, so I get caffeinated like a madman and want to put it in high gear. But like I said before, that usually doesn't work very well. Thank God I love what I do, because if I didn't, I'd have a headache from thinking about this all the time!

I've probably been posting about half as much as I used to, and I guess it might stay like that for a while. I'm kind of hording some shots that I would usually post, just so my publisher can pick and choose what they want exclusively for my book (about half of the books images will be totally new). I'll do what I can to keep the images posted here as frequently as possible. 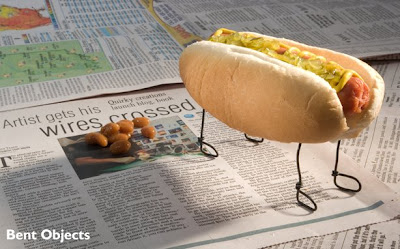 I was photographing this guy for a possible image for the book, when he ran over to the papers we have on the kitchen floor. I think he's finally trained.


Click on the image below to read all about the quirky artist who has his wires crossed. 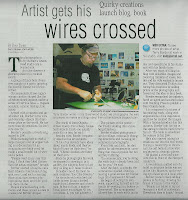 Rebecca and Her Beau 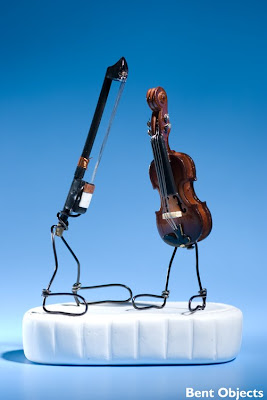 Made this untraditional cake topper ( the only kind I know how to make ) for my sisters wedding this weekend. They're both musicians of the bluegrass variety.

(the base is made from poly-clay)
Posted by Terry Border at 10:53 AM

Behind the Scenes (Labor Trouble)

The winner of the nomination process was "Behind the Scenes", and I was going to show some of the happier goings on here at Bent Objects Corporation, but there have been some problems lately.

Ever since word has gotten out about my book deal for next year, there has been grumbling about "the absence of profit sharing", and "difficult working conditions", which were "deserving of hazard pay."

I had a shot scheduled for today starring a peanut butter cracker, but he got into some real trouble on his way past the picket line. 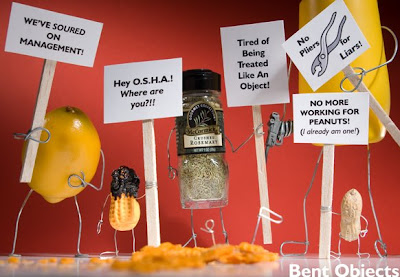 Perhaps after we come to an agreement of sorts, I'll be able to post something with a happier tone. And don't feel too bad for the peanut butter cracker, because I would have eaten him anyway.

Shown here are Lawrence Lemon, Circus Peanut, Rosemary, Mustard, and one of the peanut gang. 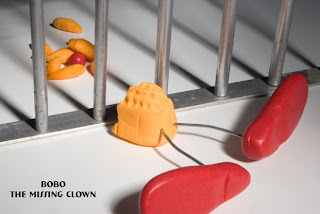 He's been found. Clues seem to point towards Sergei, the Performing Bear.

The photographic records of all the Circus Peanut Circus Tragedies can be found in the label section.
Posted by Terry Border at 10:55 AM