Tickle Fights, and The Golden Age Of Man 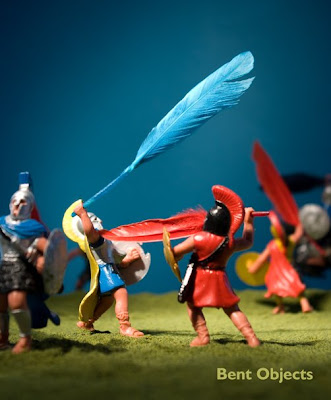 Lost in the mists of time is an age when civilizations were truly civil, and violence was unthought of. Confrontations were all settled with epic "tickle fights", or in more drastic cases- "tickle wars". For weeks and months at a time, laughter would echo throughout the land. Eventually, surrender would be announced by the leader of one of the armies, through the official proclamation of "Stop! I think I just peed a little!"
------------------------------
I bought these figures a few weeks ago with this idea in mind, but was then hesitant. It breaks my rule of not having any pre-made figure be the star of any image. But then I remembered my other rule about creating - There shouldn't be any rules. Duh.
-------------------------------
After over 850 votes, the winner of the object nomination process was "Knitting Needles". We truly pushed the Blogger Poll gadget to it's limits. The knitting and crocheting communities really battled it out, and this was with "crochet hooks" somehow ending up on the same line as "salt and pepper shakers". There were a couple of glitches like that, but we all lived to tell the tale.
It was interesting to me to watch the neck and neck race of "live animal" and "bacon". You can be sure that even though there was only one official winner here, many of these objects will make their way into images down the line.
Thanks to everyone for voting!
And a Hello to the many Chinese visitors who have visited the blog lately. I know there are some of you who can read this, so I wanted to say thanks for stopping by!
Posted by Terry Border at 1:12 PM