First of all- which prints can you win? I'm not gonna tell you. Good ones though.  But I do want to say thanks if you do this, so I want to give you a chance to win something. It'll be a surprise! Woo-hoo!  I will post the winners on Facebook though.

Make sure you put your return address on your letter so I know where to send the print if you win, and who knows? I'd love it if John was motivated to write a response to a letter or two. I certainly hope so. He wakes up everyday now to find himself in a nursing home in a shared room. He's feeling lonely and depressed, which is not his usual way of life.

Somewhere in the letter, tell him you're a friend of mine.

Some bullet points about John- 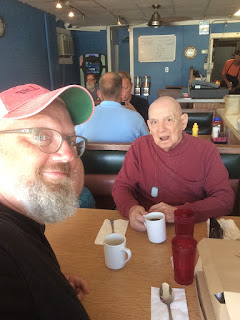 He's 99 years old.
Born and raised in Indianapolis, Indiana, but lived for many years in Florida.

When his father lost most of his business in the depression he and his brother went to live with his grandparents on a farm in the country (His grandmother smoked a corn cob pipe.)

He had a couple of relatives live to 100, and had it as sort of a goal in our conversations when he was still a young man of 85.

He played in Indianapolis burlesque houses (and some road houses) as a saxophone player right out of high school and his early twenties. Being a musician was his first dream.

Then had a job setting up talent contests in different town every week for a radio show in Chicago. The locals would invite him to dinner, thinking he never got a home cooked meal and inevitably cook him fried chicken. He says he never was so sick of fried chicken.

One story I remember of that time was when he was driving a local girl home from a dance and the local boys didn't appreciate it. As the car moved down the road he saw one of his own wheels roll on down the road ahead of them. Some of the guys had loosened the wheel's lug nuts.

He and a partner started one of the first packaged foods companies to stock grocery stores.

He has 4 children, but only one lives in town, the rest are sprinkled around the country.

He fought in Europe during World War 2. He helped to liberate one of the concentration camps. After the war his was the first group to return to France from combat, and they set up the cigarette camps. Then they had to be Military Police much to his displeasure. The stories he's told me aren't mine to tell, but suffice it to say there are many.

He worked in some capacity for the Indianapolis 500 for many years. He'd often have friendly debates with the local expert on the history of the race, because he was old enough to have actually SEEN many of the races that the expert had only read about. ha!

He's a heckuva good guy. I can't remember him saying bad things about anyone, and probably the most progressive 99 year old dude you would ever meet.